Wearing Helmets on the Range (shut your mouth!)

A commonly regurgitated myth on military ranges is that there is a safety requirement regarding the wearing of helmets (Kevlar, ACH, MICH, etc.) and/or body armor (IBA, Interceptor, etc.)

WRONG! This is typical monkey-see, monkey-do nonsense perpetrated by personnel inventing non-existent safety issues rather than reading the actual, written regulation. I invented a cartoon character and mascot named "Marvin the Safety Maggot" for such folks.

Check out this a photo of a two star General shooting a .50 caliber machine gun on an Army range. I found this on the front page of AKO (Army Knowledge Online) 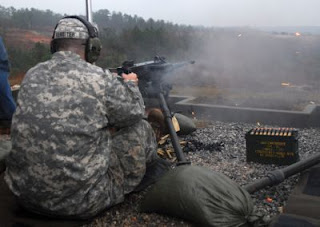 Not good enough for you? Any literate person can browse the written regulations on range safety.